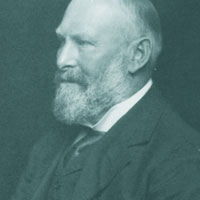 Dr Penrose was the son of a distinguished architect and archaeologist, who travelled with his parents on archaeological digs in his childhood. His sister, Emily Penrose, became head of Somerville College, Oxford. He was educated at Repton, and studied medicine at University College London, Vienna and Berlin. Penrose’s junior posts were at University College Hospital, St George’s Hospital and Great Ormond Street, and his later career was concentrated in the latter institutions. He rose to consultancy at Great Ormond Street in 1905, but retired the same year in order to concentrate on the study of natural history.

“Dr. F. Penrose, who was first Junior to Dr. Lees. Was a big handsome man with red hair and beard and on the staff of St. George’s Hospital. I was his House Physician. He was a very kindly courteous man but not a great physician and in no way progressive, or interested in difficult cases. Everyone liked him, but the critical young doctors laughed at his diagnoses and he was no teacher. In fact he was rather of the nature of a dilettante, and his great interest was in natural history not medicine. He left the staff before becoming senior Physician and lived many years at Wimbledon. On his death no one knew how to write to his widow, for he had been quite forgotten. Fortunately I had known and liked him and was able to fill in this gap. No-one is more quickly forgotten than an Hon. Officer by the Committee unless he has made a very definite place in the history of the hospital.”