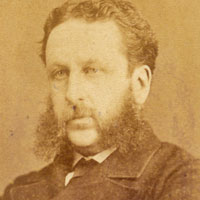 Octavius Sturges was born in London in 1833. He began his working life as an officer in the Honourable East India Company, serving in Bombay. His account of his time in India is described in a novel In the Company’s Service, which he co-wrote with his niece.  He came back to Britain in 1857, and began to study medicine at St George’s Hospital before going to Cambridge, where he kept his military hand in by becoming captain of the first university company of volunteers. He became a member of the Royal College of Physicians in 1863, and was elected a fellow in 1870.

His career continued in the 1860s and 1870s at St George’s and Westminster Hospitals. He was appointed assistant physician at Great Ormond Street, in 1873, and physician in 1884. He was particularly interested in heart disease in childhood, and lectured on this subject at the Royal College of Physicians. His publication topics included studies of chorea and whooping cough. Dr Sturges had a private practice in Wimpole Street, but was perhaps too sociable and genial to build up a large following among paying patients. He was a little deaf, which contributed to his early death: in October 1894 he was knocked down by a hansom cab in Cavendish Square (close to his place of birth and childhood home), and died just over a week later.

Some forty years after his death, Dr John Poynton had rather vague recollections of his colleague,

“Dr. Octavius Sturges; was, I believe, originally in the Navy Service. A man of ordinary size with his head rather sunk down between his shoulders. The colour of his face was high and purplish, for he was a victim of nitral stenosis. Not one of our great physicians, he was a thoroughly practical children’s doctor, an old fashioned gentleman, no teacher but much liked. He was knocked down by a cab and shaken, dying shortly after of heart failure.”