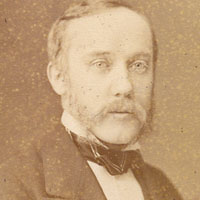 A Londoner by birth, and a star pupil at University College Medical School, Samuel Gee joined the staff of the Hospital for Sick Children at Great Ormond Street (HSC) as house surgeon in 1862, swiftly moving to Medical Registrar and Pathologist, and was appointed assistant physician in 1866, having by that time obtained his MRCP and MD. At the same time, he held positions at St. Bartholomew’s Hospital, thanks to the patronage of another distinguished Great Ormond Street figure, Sir Thomas Smith.  In 1875 he was made full physician at the HSC, and he continued his career at both hospitals, developing his teaching and research skills.  The security of the position may have been behind his decision to marry his fiancée, Sarah Cooper, that same year. Robert Bridges (a fellow physician at the HSC, and later a celebrated poet) was his best man, as befitted a man whose love of poetry was as great as his passion for medicine.

His reputation as a teacher was second to none, and his punctuality the stuff of legend. He was leaving his house in a cab one day, when a patient detained him. As the conversation continued, the door of the vehicle swung open, hit a tree, and fell off its hinges. He insisted on carrying on to Bart’s minus the cab door, so that he would not be late. He ran a very large private practice, and was appointed physician to the Prince of Wales (later George V) in 1901.

Contemporaries complained that he did not publish enough, but he managed two best-sellers (the catchily-titled Ausculation and Percussion together with other methods of Physical Examinations of the Chest, and Medical Lectures and Aphorisms), and forty-six papers in the St. Bartholomew’s Hospital reports. Although he read extensively, in several languages, most of his publications were based on his personal clinical observations, and on the study of corpses. In the words of one of his colleagues at Bart’s, he ‘was addicted to the post mortem room”. The majority of Samuel Gee’s writings related to paediatric conditions, and, today, he is best remembered for his identification of coeliac disease and splenic cachexia in children. His paper, “On the coeliac affection” appeared in 1888, which showed how the condition differed from tuberculous and dysenteric enteritis. Recalling one coeliac patient, he noted the child, “was fed upon a quart of the best Dutch mussels daily, throve wonderfully, but relapsed when the season for mussels was over…”  Other topics included what later became known as congenital laryngeal stridor, Hirschsprung’s disease and athetosis.

The patients at Great Ormond Street appreciated his honesty and straightforwardness. He taught a five year old to tell visitors his complaint. Next day a lady asked the boy what was wrong with him. Came the reply, “Hydronephrosis, from the Greek words hudor, water, and nephros, kidney.”

Small and punctilious, hard-working and no sufferer of fools, Samuel Gee rose to the top of his profession thanks to continuous effort and sheer force of intellect. His friend Robert Bridges wrote a short poem in Latin about him, the rough translation of which gives some idea of his physical presence and his qualities as mentor and friend,

“But who is this coming, slender and sleek-haired, following the big men, himself half as tall? Is it you, Gee? Had you not been my guide, philosopher and friend, the learned school of medicine would be jeering at my headlong retreat.”