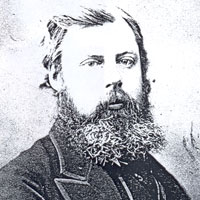 William Dickinson was born in Brighton, educated at Cambridge, and trained at St George’s Hospital. He graduated from the medical school there in 1859, becoming curator of the museum. His association with St George’s Hospital was long, but he was appointed assistant physician at Great Ormond Street in 1861, five years before he was given a similar post at his alma mater. Dr Dickinson was physician at the children’s hospital from 1869 to 1874. He was censor and curator of the museum at the Royal College of Physicians, and examiner in medicine to the Royal College of Surgeons, and to the universities of Cambridge, London and Durham.

Although a general physician, he was best known as a kidney specialist with regards his adult patients. At St George’s, he visited the wards every day, invariably followed by an admiring group of students. The editor of Monk’s Roll viewed his relationship with that hospital with something of a jaundiced eye, “He worshipped St George’s Hospital almost to the point of idolatry and received in return, during his long life, no small measure of its homage.” He also married into the St George’s family; his wife Laura was the daughter of a physician there.

At Great Ormond Street, he seems to have been particularly interested in children with neurological conditions. Dr Poynton, in 1943, had only a vague memory of him;

“Dr. Dickinson I only knew as a friend of Dr. Cheadle. He was a big man, one of those who did not suffer fools gladly. I heard him at a meeting of the Medico-Chirurgical Society simply wither an unfortunate speaker with bitter sarcasm. He had much ability and was Physician to St. George’s Hospital. I only knew him as kindly to me as a young Doctor and a friend of Dr. Cheadle, and well-known for his work on renal diseases.”