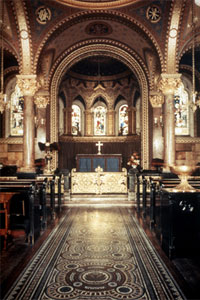 In 1875, a new hospital building was opened to meet the demand from ever-increasing patient numbers and the rapid advance in knowledge and treatment of childhood disease. This magnificent structure contained a department for outpatients, an operating theatre, a dispensary, accommodation for 104 in-patients, kitchens, and new offices. Hospital buildings, however (at least at Great Ormond Street), don’t last for ever, and the only part of the 1875 building to survive today is the hospital chapel.

This beautiful building was the gift of an anonymous donor and built two years before the official opening of the new hospital. The generous donor was in fact Mr. William Henry Barry, who provided the Chapel as a memorial to his wife Caroline, who had died the previous year. The architect was his relative, Edward Barry, R.A. (third son of the architect of the Houses of Parliament). William Barry endowed the Hospital a Trust Fund with an additional £40,000, to pay the salary of the chaplain and to keep the building in good repair. Two conditions attached to the endowment were that at least one service should be held each week, and that the service should be conducted in accordance with the Book of Common Prayer of the Church of England.

At first the Chapel was illuminated with candles from chandeliers hung from the ceiling but, unfortunately, the wax used to fall on the worshippers in the pews, and it was decided that the candles had to go. Thanks to the generosity of publishing magnate, Sir John Murray, electric light candles soon replaced the beeswax originals. The plinth on which the font stands (the gift of another publisher - Oliver Chadwyck-Healey) was made from the wood of the famous plane tree which stood in the garden of the original hospital buildings at 49 Great Ormond Street.

Over the years the chapel has been witness to the hopes, fears and prayers of patients, their families and the hospital staff. Christenings, funerals, services of thanksgiving, memorial services and carol services have punctuated the silent thoughts of visitors. In the 1920s and 1930s, patients - upset by the departure of visiting parents on Sundays - were whisked down for a spot of brisk hymn singing before going back to the ward for bread and extra jam.

The chapel had its entrance in Powis Place, but the creation of the Variety Club Building necessitated a radical rethink of its positioning within the new 1990s hospital. It was decided that the chapel was an integral part of the hospital identity, and that it would be saved – but moved. A concrete cast was laid underneath it, and the building was supported by jacks. The whole chapel was placed in a giant waterproof ‘box’ and moved by sliding it along a purpose-built runway, being pushed by hydraulic ram-jacks. The preparations for the move took several years, but the operation itself took just two days, and was the first time that a complete building of this architectural importance was re-sited in this way.