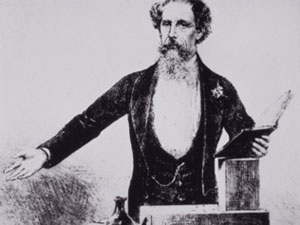 For many years the Hospital for Sick Children at Great Ormond Street remembered one of its earliest benefactors through the presence of a ward named after him. He was one of the hospital’s earliest, most staunch and most important supporters. He was also, until his death in 1870, the most famous Englishman in the world, credited with the invention of the English Christmas, the great (and long!) English novel, and with the best aspects of the term ‘Victorian’. He was, of course, Charles Dickens.

Dickens was a brilliant observer of human foibles, and began to make a decent living as a journalist when he was in his early twenties. In his novels, he created some of the most memorable child characters, encountering (and often overcoming) poverty, injustice, and the cruelty of the Victorian adult world. Oliver Twist, the Artful Dodger, Tiny Tim, and David Copperfield leapt from his imagination on to the page, and captivated readers throughout the world. Charles Dickens became a rich and celebrated man, but he never lost his social conscience, and used his fame to further the causes dearest to his heart. Having seen a beloved daughter die young, the welfare of the nation’s children was at the top of his list of concerns, and he used his pen and his considerable dramatic and oratorical powers to raise awareness of the plight of poor children and to raise money for children’s charities. 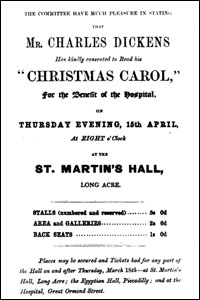 When the Hospital for Sick Children at Great Ormond Street opened in February 1852, it did not immediately capture the attention of the public, on whose generosity its future would depend. Charles Dickens soon changed that. In April, he published an article, entitled ‘Drooping Buds’, in his magazine, Household Words.  He described how one third of babies born in London each year died before their first birthday, and emphasised that the Hospital was the only institution dedicated to saving this appalling waste of life. He called to his readers for support, and their enthusiastic response helped to keep the Hospital open and expand the base of its supporters.

Charles Dickens remained in touch with Great Ormond Street. By 1858, the original house was bursting at the seams and the hospital was facing its first acute financial crisis, threatening it with bankruptcy; Dickens was called on to help rescue the project again. He responded by giving a whole evening’s performance of his most famous passages on children, and raised enough money to enable the hospital to buy the house next door, and effectively double in size. That same year, he gave the address at the annual fund-raising dinner. The text was printed and reprinted in subsequent years to raise money for the charity, as was another piece of journalistic generosity to Great Ormond Street. In 1862, his new journal, All the Year Round, published a long piece, “From the Cradle to the Grave” on the work of the hospital. It describes the happy atmosphere of the wards, full of toys and chatter; the advances in children’s medicine that the Hospital had facilitated; and the benefits that poor metropolitan families had gained from its work.

The language is flowery and the sentiments from another age, but the power of the words of Charles Dickens supported the hospital in the difficult early years of its life. Without his commitment, there may not have been a Great Ormond Street Hospital, filled with the descendants of those first patients.