In addition to its own convalescent home, Cromwell House (which was situated in Highgate in north London), The Hospital for Sick Children (HSC) also used a variety of institutions in the country and at the seaside. Children, whose medical condition had improved, were sent away from the grime and polluted air of their family neighbourhoods, to recuperate and grow strong again.

In the 19th century many children were sent to the seaside to benefit from the health giving and recuperative properties of sea air. Brighton, and Eastbourne to a lesser extent, were the most popular destinations. The Royal Sea Bathing Hospital at Margate was also used by the HSC, where children with various forms of tuberculosis were sent to benefit from the supposed healing effects of sea bathing.

Not all children went to the seaside: another very popular home was on the outskirts of London, at Rumbolds Farm in Mitcham, Surrey.

The Hospital was obliged to pay for their patients stay at these institutions, and made use of donations from its supporters for this purpose.

In the early years of the 20th century, the trend to send children to the coast appears to have diminished, being replaced by homes in England’s rolling countryside such as Lymington in Hampshire, Fairford in Gloucestershire, and Baschurch in Shropshire. 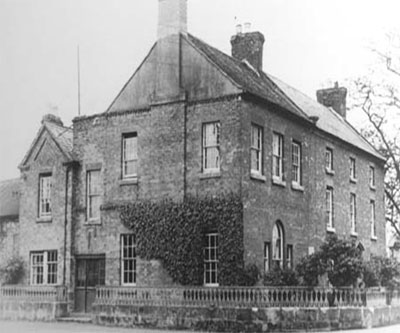 The Baschurch Home, in Baschurch was opened in 1900. It was founded by Agnes Hunt (1866-1948) and Emily Goodford, two trained nurses, in a house converted for that purpose. When she was young, Agnes had suffered from osteomyelitis, leaving her seriously disabled for the rest of her life. Her ambition to become a nurse had stemmed from this experience. When they first acquired Florence House it needed a great deal of renovation but in October 1900 Agnes and Emily were able to welcome their first patients - four boys and four girls in need of good food and country air. 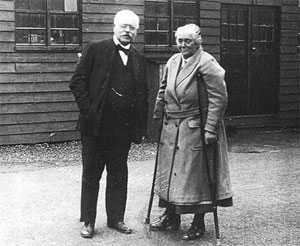 Initially, the children were accommodated upstairs in the main house but it soon became evident that carrying a crippled child up and down the stairs was hazardous for both patients and staff. Agnes explained in her autobiography:  ‘…finally, we decided that as the doctors all advocated fresh air, we would build a shed in the garden and I should sleep there with the bad cripples and only children who could walk should go upstairs…..medical opinion was doubtful of the cold, so consent was given rather anxiously’.

The children’s medical needs were provided by visiting doctors, and in 1904, Robert Jones, a respected surgeon at the Royal Southern Hospital in Liverpool became Honorary Surgeon at Baschurch and made monthly visits to see the children. 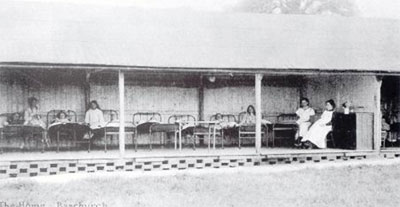 During the First World War, Baschurch Home was used to treat wounded soldiers but the staff continued to treat children, the Home being one of the first institutions to use x-rays for diagnostic purposes. In 1919, Park Hall Military Hospital in Gobowen (built in 1915 to serve the local military camp) was purchased to replace the existing Home, and in 1921 it was renamed the Shropshire Orthopaedic Hospital. In 1933 it changed name again, being rechristened the Robert Jones & Agnes Hunt Orthopaedic Hospital, on the death of Sir Robert Jones. The current hospital still stands on the site in Gobowen.

The material and photographs in this article have been supplied by Shropshire Archives and The Robert Jones and Agnes Hunt Orthopaedic Hospital. More information can be found by following the links:
www.discovershropshire.org.uk and www.rjah.nhs.uk.

The home at Lymington, called ‘Lisle Court Farm’, and was opened in August 1902, and funded by Mr William Ingham Whitaker, of Pylewell House, East End, Lymington. It was an 18th century farm house, situated down a country lane in the heart of the New Forest. According to family records, William Whitaker spent between £350 and £1,000 a year on the home over a period extending from 1903 to 1914, a very generous support worth well in excess of £400,000 in today’s terms.

The HSC’s Annual Report for 1906, show that 73 children had been sent to Lymington the previous year, making it one of the most popular Homes used by the Hospital at that time. The report stressed the benefits to both the Hospital and the children in having such homes available to them. They enabled the medical superintendent to discharge children at an earlier date, children whom ‘he might otherwise have to keep in hospital, for want of any place to send them except their own unsuitable homes.’ Not only was this good for the children, but it had benefits to the Hospital as well: early discharge meant that beds were made available more quickly for new occupants – bed blockers are not a late 20th century invention!

The Royal Sea Bathing Hospital at Margate was founded in 1791 by John Coakley Lettsom, a well known and influential London doctor, famous among other things for founding the Medical Society of London, forerunner of the Royal Society of Medicine. Its purpose was to be a ‘receptacle for the relief of the poor whose diseases required sea-bathing’, a practice which had grown in fashion among the rich (including the Prince Regent) towards the end of the 18th century.

The hospital was to house patients in open-air shelters so they could benefit from the sun and sea breezes in addition to sea bathing. It opened (after a long contest between Margate and Southend to be the host for the institution) in Spring 1796. The new hospital was situated close to the beach and had a ‘bathing machine …built for the patients sole use’.

The hospital was established on a voluntary basis and hence was funded, in part by subscriptions, as was the case with other voluntary institutions. However, the Sea Bathing Hospital supplemented this income by charging organisations which referred patients to it, and some went further in paying a substantial amount to reserve beds for its use. The Radcliffe Infirmary at Oxford paid £600 in 1851 to maintain six beds for its patients. The St Pancras Workhouse also used the facility. In the late 1850s and early 1860s there are references in the Vestry minutes to the Workhouse Surgeon being sent to Margate to investigate the state of health of inmates who had been sent there, primarily to determine if they were fit enough to return to London. As the Workhouse had to pay for the beds their inmates occupied, it is of little wonder that they sent their own doctor to assess the ongoing need for the expense.

In the early days, patients were accepted into the hospital under recommendation by subscribing governors, but also had to be examined by a medical board either at London Workhouse or St George’s Hospital. Patients travelled by ferry (the Margate Hoy) to the hospital, a journey which could take two rough and noisy days.

The hospital admitted both adults and children, male and female, although in 1841 the census suggests that children were beginning to predominate: there were 214 patients resident in total, 154 of whom were between 5 and 15. From the start the majority of patients were suffering from some form of tubercular infection – often described as scrofula, or just disease of knee. 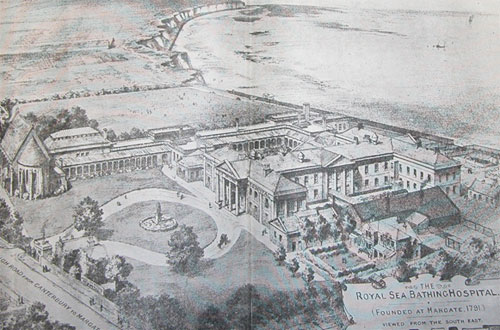 By the time the Hospital for Sick Children (HSC) had opened, the Sea Bathing Hospital had been considerably expanded, and two large reservoirs for sea water had been constructed, which were used to fill baths, alleviating the need to actually take patients into the sea. However, it seems that right to the end of the century sea bathing continued for some patients.

The HSC sent its first patient to Margate in 1855: nine year old John Beardmont who was recovering from an operation on his tubercular foot. The Hospital was not a heavy user of the facility, sending around 40 patients there between 1855 and 1900, but was also known to send its nurses on occasion. Susan Wakefield, a nurse of three years experience at the Hospital, was sent on recommendation of her medical attendant in June 1866, the HSC agreeing to pay her fees of £2 8s. It seems she liked the place as she stayed for 18 months, coming back to the HSC with testimonials, suggesting that her convalescence had transformed into a job.

By the early 20th century, the emphasis of treatment had changed somewhat. Sea bathing (or swimming in sea water pools) was gradually discontinued and the focus moved onto fresh air and sunshine: with patients spending much time on wide west-facing balconies, partly open to the sky. The HSC’s use of Margate declined steeply at this time, to be replaced by homes such as those at Lymington and Fairford.