The Almoners’ Department was a pre-NHS forerunner of the Social Work Departments found in modern hospitals today. Such a department was first opened at Great Ormond Street in 1909.

The majority of hospitals in the Edwardian era catered exclusively for patients too poor to pay for medical care. They would come into the Hospital as in- or out-patients and receive the best medical treatment available at the time. But as soon as improvement was seen, they would be sent back to their poverty stricken homes – which had often been an underlying cause of their problem in the first place. Hospital staff had long accepted that treatment could be made more effective by improving the environment of convalescent patients. To this end, some hospitals had begun to appoint almoners (who were invariably women) from the 1880s, to organise after-care for patients, including stays in convalescent homes, special equipment for use at home, additional nutritional needs and so on. At the same time, almoners were expected to identify patients whose families were in a position to make some financial contribution towards treatment. As the condition of hospitals improved, more people were willing to use their services, and the almoner’s role was to ensure that those who could afford to pay, did so.

Great Ormond Street was later than some in employing a lay person to undertake this work, the reasons probably connected to appear critical of parents who were too poor to be able to improve significantly their domestic environment. This did not mean that they did not make any provision for aftercare provisions; until 1909, the sister in the Out-Patient Department dealt with those requirements for that were deemed to be within the capability of the hospital. 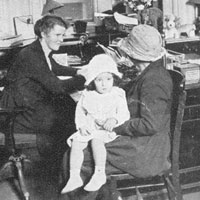 The Management Committee met in late 1908 to discuss the desirability of appointing an almoner, with the chief intention of ‘preventing abuse’. By this, they meant that it was the almoner’s primary duty to enquire into the income of families, so that only those poor enough to qualify were allowed to present their children for treatment. Until that time, a (male) Inquiry Officer and a (male) Out-Patient Clerk had interviewed parents. If they decided that the family was too well off to merit treatment, parent and child were hauled off to the admitting doctor, to establish whether treatment at Great Ormond Street was necessary on medical grounds. If it was not, then patient and accompanying family member were dismissed with no ceremony. The end result of this rather brutal process was a constant stream of complaints from families, and a high level of misunderstanding between the Hospital and the very constituency it was supposed to be serving.

In appointing an almoner, the Hospital management’s primary concern seems to have been to stop better-off families abusing what was a charity with no endowment and an uncertain annual income. She was also expected to act as a go-between and ambassador for the Hospital in its dealings with patients’ families. It was hoped that a non-medical female member of staff would be able to explain the rules of admission to families without incurring their anger, and would have the time to refer them to other suitable institutions or organisations. It was also deemed advisable to take the task of organising equipment, dietary supplements and convalescence from the Out Patients’ sister, who was employed for her nursing abilities, and not her training as the universal Miss Fix-It of the Hospital. The first decade of the twentieth century was particularly volatile in terms of metropolitan child health. Financial crises in traditional London trades, hot summers, and epidemics (including poliomyelitis) contributed to the first significant rise in child death rates since records began in 1837. At the same time, national and local government introduced a number of initiatives to improve child health, including a network of baby clinics, subsidised school dinners, and local milk depots. The 1908 Children’s Act, with its emphasis on child welfare, may have been the spur to the Hospital to appoint its own department of enquiry and assistance.

The first almoner was Miss Janet Salmon, who remained here until 1937. In her office, located within the Out-Patient department, she first made enquiries as to the weekly income of families seeking treatment for their child. If the parents earned over £3 a week, the family was deemed ineligible, and alternative provision was suggested. This interviewing process was also part of the drive by the Hospital to inform parents of the weekly cost of treatment for their child, and to persuade them to contribute a minimum of sixpence (2.5pence) towards this cost. A second almoner was appointed in 1914, paid for by the After Care Trust, whose job was to arrange for after-care services for patients referred from the wards only. The work of both departments increased greatly during the Great War, and they were merged into an expanded Almoners’ Department in 1918.

This Department continued to grow, and employed ten people by 1921. They were required to keep meticulous records on each case, and to negotiate with other Hospitals and charities (as well as local authorities) for equipment, convalescent home places, and nutritional supplements. The workload increased year on year. By 1936, the number of patients placed in outside convalescent homes alone had increased to 2400 per annum. Each of these homes was inspected regularly, so that the Hospital was assured of the quality of care being given to Great Ormond Street patients. The money to pay for the patients’ convalescence came from many different sources, and the Almoners’ Department became adept at persuading individuals and organisations to sponsor single children or groups of patients. For example, railway companies sponsored places for the children of rail workers, and  ex-servicemen’s children were paid for by military charities.

One area of growth was in the relationship between the Hospital and the National Society for the Prevention of Cruelty to Children. NSPCC women inspectors became the means by which the Hospital could ensure that they saw out patients whose parents could not or would not bring them to clinics. As the number of clinics increased (in the 1920s, clinics for speech problems, rheumatism, asthma and child guidance were opened), so did the staff in the Almoners’ Department. The last department caused the most work, as it entailed visits to the patients’ homes, interviews with family members, teachers and local clergy, and consultations with Hospital staff and other agencies where removal of the patient from the home was recommended. It was delicate, precise work, and entrusted only to those staff members who had been through the recognised national training programme of the Institute of Almoners.

During the Second World War, a skeleton staff kept track of evacuated patients, ensuring their records were sent to the appropriate authorities wherever they had been sent. As more families returned to London, the department once more expanded, and had a staff of twelve by 1946.  Almoners became NHS staff in 1948, at which point they were freed from their fund-raising duties, and could spend more time helping the needs of individual families. The department continued to increase, as twenty new clinics were opened up in the ten years following the end of the war. 1948 was a momentous year for the Hospital being also the first year of a short-lived experiment for lung patients. Eight GOSH patients were sent to Switzerland between 1948 and 1954, in an attempt to facilitate their recovery, their fares being paid by the Peter Pan League and the Friends of the Poor. In 1950, the medical staff recognised the importance of the work of the Almoners, and the department was reorganised so that their work with patients was better integrated with the medical treatment.

The Almoners’ work involved an encyclopaedic knowledge of what was available within GOSH and elsewhere for the benefit of patients. The Management may have at first appointed Miss Salmon as an anti-fraud detector, but the women who worked under her and her successors saw themselves primarily as the intermediaries between the Hospital and the patients’ families. It was the Almoner who offered practical advice and guidance, and a sympathetic ear, to the parents of coeliac patients. It was the Almoner who conducted delicate conversations with long-term patients, affected by limited contact with their families, and it was the Almoner who found the money for respite care, and for the transport costs of cash-strapped relatives, so that they might visit as much as possible. As a group, the women took a practical approach to a role in which they were faced daily with the practical difficulties of having a sick child in the family. In the words of one Almoner

“[Our] work is not designed to make life softer but to help people cope with difficulties, changing in a constantly changing society.”