When it first opened in 1852, the standard of nursing at the Hospital for Sick Children at Great Ormond Street (HSC) was thought to be much in advance of other great general hospitals. The first matrons, Mrs Willey and Mrs Rice, are reputed to have paid special attention to securing respectable young women as nurses, in contrast to the situation at other hospitals which were ‘still in the slough and mire of a disreputable class of nursing’, according to a nurse historian’s account written in the early 20th century. Nursing departments at this time were often headed up by middle class widows, obliged to work to support themselves after the death of their husbands. They were appointed for their housekeeping skills; knowledge and experience of nursing was deemed unnecessary. Their nurses were often indistinguishable from servants and cleaners – and frequently performed both roles. In the HSC’s early days, despite claims to the contrary, its nursing department resembled other hospitals. Mrs Willie and Mrs Rice were respectable widows, in need of a wage, and, as in other hospitals, nursing was performed by working class women. However, by the 1860s things had changed and a team of well-to-do women, who worked on a voluntary basis, took over the superintendence of the wards, and the hospital began admitting ‘ladies’ as probationary nurses at the same time. By the end of the century most of the Hospital’s nurses came from the middle and upper middle class. 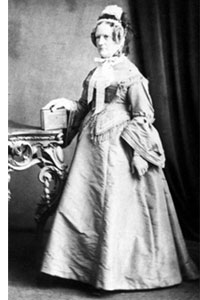 Mrs Willey was the first matron of the Hospital for Sick Children. She was appointed in December 1851, two months before the Hospital opened. As Matron, she was responsible for both the housekeeping and nursing departments and her first task was to employ a nurse, a housemaid and a cook. Frances Willey was probably a typical candidate for the post, being the widow of a naval officer.  She stayed at the Hospital for three rather tumultuous years during which the nursing department grew in number from one to 13, and the number of beds rose from 10 to 30. Mrs Willey appeared to be a combative soul, getting into several serious disagreements with the House Physicians and Surgeons. These arguments were usually about the control of the nurses, with both parties claiming ultimate authority. For Mrs Willey (who was approaching 50) it must have been hard to accept that these medical officers, quite likely half her age, would take precedence over her in the running of what she considered to be her department.  She resigned in 1855, after another dispute with the medical officers. Her time at the Hospital for Sick Children, while possibly stressful was nevertheless very productive. She left to take up the post of Matron at St George’s Hospital, a much larger institution, and with a £10 a year increase in salary. Mrs Willey continued her argumentative ways at her new hospital, but that, as they say, is another story. 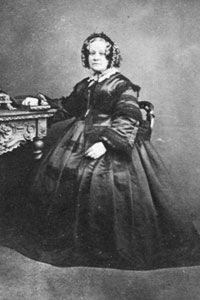 Her successor was Mrs Rice. She joined the hospital with tremendous experience, having been one of the first matrons at Kings College Hospital and prior to her appointment at the Hospital for Sick Children, she had been Matron of the Bedford County Prison. Mrs Rice represented the continuum, for although she had experience as a matron it is unlikely that she had any practical experience of nursing. Her tenure was much less marked by controversy than Mrs Willey’s and proceeded quietly, until late1859 when the Management Committee took a decision which would change the nature of nursing at the Hospital for the rest of the century. The Committee decided that to improve the efficiency of nursing in the hospital (and to relieve the Matron of some of the work load) it was necessary to recruit a superintendent for the nursing department. She would be responsible to the Matron. Mrs Emma Cross was appointed to the post in early 1860. It seems the two women did not get on well – whether as a result of personality clashes or as a result of the ill-defined boundaries of their jobs is not known – but as Mrs Rice’s health began to fail, discipline within the household deteriorated badly. A group of Lady Visitors, which included Louisa Twining, was formed to investigate declining standards in the nursing department. They reported that on many days Mrs Rice was ‘never seen about the house before 9am’, on account of her increasing frailty. One Lady Visitor commented that Mrs Cross needed her ‘hands strengthening’, as the influence of the Matron on the household was too strong. The Matron was accused of using her position to weaken Mrs Cross’s authority, and to diminish her in the eyes of the nurses.  Louisa Twining hit the nail on the head when she described the existing system as doomed as the duties of the two women overlapped.

The Lady Visitors concluded that Mrs Rice lacked the breeding and social class necessary to instil and maintain order among the ranks of nurses, who were all drawn from the servant class. In 1862 they recommended that the Matron should be retired, and replaced with a Lady Superintendent. 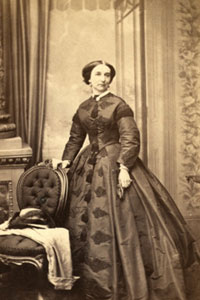 The Committee took that recommendation to heart and in 1862 Miss Isabella Babb, who was 38, was appointed as Lady Superintendent of the Hospital. She was the daughter of Grimsby-based solicitor, George Babb, but was introduced at Great Ormond St, by Dr West, as a relative of Florence Nightingale. In this move, the Hospital for Sick Children was a little ahead of the times. The Nightingale School of Nursing had only recently opened, and few if any, of the large London hospitals had begun the gradual replacement of its old-style matrons with educated ladies.

Miss Babb had no previous experience of hospitals or nursing, and her first move was to delay her appointment for six months in order to spend time observing nursing in a number of large hospitals. Several things were expected from Miss Babb, as a direct result of her social status. She was expected to raise standards of nursing, to attract a higher class of women to join as nurses, and, importantly for a voluntary hospital, to be an asset in its fund raising activities. Most of these objectives were achieved. Under Miss Babb’s direction, a new breed of nurse entered the hospital, in the guise of ladies presenting to work as sisters on a voluntary basis. Many of these women began their nursing career as hospital visitors, spending time on the wards reading to the children while the nurses got on with their jobs. As a result most had no direct experience of nursing, but as their primary role was to supervise the regular nurses and imbue them with a sense of decorum and respectability, this was of secondary importance.

The arrival of Miss Babb marked a turning point in the nursing department. Previously the nurses had been hired from the ranks of domestic servants, but now two tiers of nurse began to emerge. While the regular nurses continued to be recruited from the lower classes, Miss Babb introducing the first paying (or lady) probationers: young women drawn from the higher reaches of society and prepared to pay for their training. They were destined to become sisters or even matrons.  This mimicked the situation at the Nightingale school – although training at the Hospital for Sick Children was an altogether less formal affair, being entirely based on learning on the job from whoever happened to be available.

The voluntary nature of the sisters’ work continued until the late 1880s, saving the Hospital a considerable amount of money in reduced wage bills, and reinforcing the class structure of nursing. In the late 1870s, these arrangements were questioned, in part as a result of the growth in size of the hospital and the increasing complexity of the job, and it was recommended in future that all members of the nursing staff should be salaried. However, as the Lady Superintendent remained unpaid until the late 1880s, it is unlikely that this rule was rigorously applied, and given the economic benefits to the hospital, there was little incentive to do so.

Miss Babb retained her post at Great Ormond Street for seven years, leaving the Hospital in 1869, on account of poor health. On her departure she was made honorary governor of the hospital for life, the first woman to be awarded this honour. Little is known of her later life, except that her health must have improved, as she lived to the ripe old age of 87. 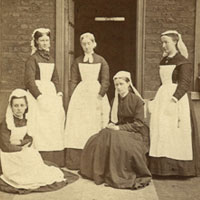 Miss Babb’s appointment set a trend which persisted through to 1877, of appointing ladies to the post of Lady Superintendent. The two women who followed Miss Babb had both worked as voluntary sisters in the Hospital prior to their appointment, but apart from that had no experience of nursing at all. They worked on a voluntary basis and it was clear that both sisters and the Lady Superintendents obtained their posts through a network of connections, recommending friends and relations to posts as they became vacant.

Miss Babb was replaced by one of her trainees, Edith Vizard, the daughter of a London-based solicitor. In this photo, taken in 1871 Miss Vizard is thought to be the lady seated on the right. According to an annotation on the back the photo the other women were: Miss Annie Balderson (a lady pupil), Mrs Dacre (who is not mentioned in any hospital records), Miss Elizabeth Laishley, who later became Lady Superintendent of the convalescent home at Highgate, and Miss Anne Dalrymple Hay, who became Lady Superintendent of the main hospital on Miss Vizard’s departure later that year. Miss Dalrymple Hay was probably the Hospital’s most distinguished Lady Superintendent. She was the daughter of a Scottish baronet, Sir James Dalrymple Hay.

Miss Dalrymple Hay resigned in 1877, and after a brief dalliance with an external Matron, the Management Committee retreated back to one of its own. In 1878, Catherine Wood was appointed as Lady Superintendent of the main Hospital. While Miss Wood may have been a ‘lady’ she differed from those who preceded her in her serious interest in nursing as a profession, and in nurse education and training. It would be another 12 years, at least, before a formal system of training and examination was introduced, under another matron, but Catherine Wood’s influence can probably be seen in these developments. You can read more about Catherine Wood in an article which focuses on her and her work.