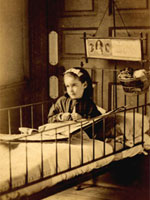 Annie Kezia Eastland was admitted to the Hospital for Sick Children on 21 November 1870, with a node on her tibia, and a secondary diagnosis of necrosis. She was nine years old. This is picture taken of Annie while she was in the Hospital, and was probably used in one of the Hospital's fund-raising schemes. She is in one of the Hospital's sponsored cots which were supported by donations. In return, sponsors were entitled to have the cot named after them, or someone they nominated. This one was the ‘Amy Louisa' cot. The plaque hanging above the bed bears the name of the cot, and possibly some pictures of ‘Amy Louisa'. 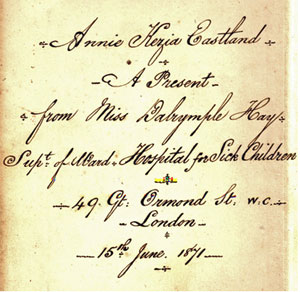 Annie was at Great Ormond Street for over six months, being discharged on 15 June 1871. Her condition on her release was described as relieved, but within a couple of months Annie was back, readmitted on 25th August 1871, with the same diagnosis. Two months later she was sent to Cromwell House, where she stayed for one month. Annie's problem was described as being relieved, but events would prove that this was optimistic. 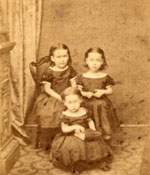 The album contains photographs, including this one showing Annie with her two younger sisters, Mary and Lizzie (right). There are also photos of a man and a woman, who could be her mother and father.  What prompted Miss Dalrymple Hay (who became Lady Superintendent of Hospital later that year) to present such a generous gift to Annie? Perhaps, Annie had kept the photographs with her during her very long stay, to remind her of her family, and on her discharge, Miss Dalrymple Hay had made her a present of the lovely little album, to keep them safe.

Annie's family appear in the 1871 census, living in Oatlands Park, a grand suburb of Weybridge, Surrey. Her mother (a widow) was a needlewoman. Annie was at Great Ormond Street at this time, so was not included in the census return with her family, but her two sisters were present. In 1881 the family was still in Oatlands Park, but there was no sign of Annie. Her two sisters were listed as pupil teachers, and her mother's occupation was Housekeeper. Annie was finally found in the indexes of deaths for June 1873. She had died at home from phthisis, the respiratory form of tuberculosis. Annie's original disease was probably the result of tuberculosis of the bones, and it had spread to her lungs. What happened to her after her discharge from Cromwell House in October 1871 and before her death in June 1873 cannot be known, but her story reminds us that not all the children enjoyed happy outcomes.