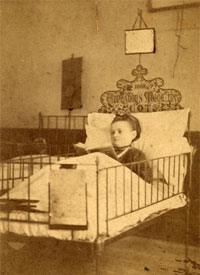 Clara Richardson was admitted to the Hospital for Sick Children on 8 August 1873 suffering from a tubercular infection of her knee joint. She was nine years old. The disease was described in the register as being strumous in nature and was accompanied by abscesses. Poor Clara was subjected to an operation in which part of the bone in her knee joint was excised. Her recovery was very slow, and it was not until almost a year later that she was deemed fit enough to be transferred to the convalescent home at Highgate. However, once there, she continued to improve and after less than three months she was pronounced cured, and discharged on 22 October 1874.

Clara was the daughter of railway clerk, William Richardson, who was originally from Louth in Lincolnshire. She had one elder sister, Emily, two younger brothers, William and Charles and a younger sister, Eleanor. By 1881, Clara’s father had died. Her mother and sister, Emily, and brother Charles were still living in Islington; her mother working as a ladies attendant. Clara and Eleanor were not at home, and appear to have moved to Louth to live with their father’s married sister and her family. Perhaps Clara had been advised for the sake of her health to move away from the poor urban environment of Islington, and to take refuge in the country. Both girls were described in the 1881 census as scholars, although by this time Clara was 17 years old, and in other circumstances might have been expected to earning a living.

By 1891 she was. She had taken a position as house keeper to the family of a printer and seller of books in Louth. Her sister had returned home and was working as a mantle maker’s shop assistant. Although her father had been dead some twenty years the family’s connection with the railway was maintained, through his widow (who was working as a Waiting Room Attendant for the Great Northern Railway) and his youngest son, Charles, who was working as a railway clerk.

In 1901 Clara was still working for the same family. What she did with the rest of her life is unknown, but at least she was able to overcome her serious childhood affliction to make her own way in the world as a young woman. Her chosen occupation as house keeper seems to fit the picture of a rather stern-looking child. Poor Clara lies in her bed (a cot sponsored by the popular children’s magazine, Miss Judy’s Magazine) staring into the distance, beyond the book resting on the cage which protects her afflicted knee.