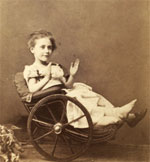 Nellie (otherwise Nelly or Ellen) Wallace, was living at Hyde St, Hoxton (in London’s East End) when she was admitted to the Hospital for Sick Children. She was having problems with her knee and on 29 June 1872, age four and a half, she came to the Hospital, and was placed under the care of one of the surgeons, Mr Haward. Nellie was probably suffering from a tubercular condition, caused by drinking contaminated milk. She stayed in hospital for three months, and in September, having recovered sufficiently, was sent to the convalescent home in Highgate to build up her strength. While there, unfortunately, she contracted scarlet fever and on 17 December she was sent back to Great Ormond Street. Her dose of scarlet fever was described as mild, and she was considered fully recovered by 20 January 1873. It is not clear if she returned to Cromwell House, or was discharged at this point. However, her knee problems must have worsened as she was re-admitted to the main Hospital on 10th March 1873 when part of her knee joint was excised. The only option the Hospital had to treat her diseased bone was to cut out the affected part.

Nellie’s recuperation lasted many months, but finally, on 17 July, the doctor pronounced himself pleased with her progress, noting that she made, “a rapid and perfect recovery”. Again she was sent to Cromwell House, where she stayed one month, before going to Brighton to complete her convalescence. It would seem that her doctor’s judgement was a little premature, as Nellie came back to the Hospital once more, on 15th November 1873, with necrosis of the same bone that had been partially removed during her last visit. Although it had looked as though all infection had been excised, it is clear that some disease remained, and she had to undergo further surgery. Nellie was discharged after only a short stay this time and was sent once more to convalesce at Highgate, being finally discharged on 11 March 1874, once again pronounced fully recovered.

On her readmission in November 1873 her address was given as ‘The Orphanage, St Leonard’s Terrace, Maiden Hill’, implying that her parents had died at some point during her illness. Quite why Nellie would have been in an Orphange is unknown. Her family have been found in the 1871 census living at 5 Hyde Rd in Hoxton, as the hospital register recorded a year later. Her father, George, was a coffee house keeper and the family included her mother Catherine and brother William. Nellie herself was listed as Ellen (Nellie being a common ‘nickname’ for girls called Ellen). By the 1881 census, the family, including Ellen (Nellie), her brother William and sister Georgina had moved to Great College Street near Westminster. Her mother was not listed, and although George was described as married, it is possible that Catherine had died – by 1891 George (who was still running a coffee house) was described as a widower.

Why Nellie appeared to be living in an orphanage on her last admission to the Hospital is difficult to explain: her father and brother were certainly alive at the time. One explanation may have been that Catherine, her mother, died during or soon after the birth of her second daughter. In the immediate aftermath, George may have been unable to cope with the three children (one of whom was in a delicate state of health) and they may all have been placed in an orphanage for a short period of time.

Whatever the explanation, one question which the census answered is that Nellie survived her experience in Great Ormond Street, for seven years at least.