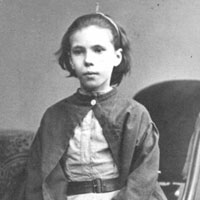 Rebecca Novis was nine and a half when she was admitted to the Hospital for Sick Children on the 17 April 1871. She lived in nearby Canonbury (part of Islington), had one sister, and her father earned his living by dispensing medicines at the huge Islington workhouse. Rebecca had survived two deadly diseases – measles and smallpox – but she was generally a very healthy child, if rather nervous. Two years before, she had developed a hard, dry cough that was so violent her doctor prescribed a chloroform inhalation so that she wouldn’t suffocate. The reason she was taken into the hospital was that she had hardly spoken, moved or opened her eyes for four months.

At Christmastime she had fallen into a stupor, and refused to eat for a fortnight. After two weeks, she sat up in bed, and spent her days reading. As long as her mother was by her bedside she was quite happy, but still refused to speak and walk. Her father, however, claimed to have seen her walk round the table one evening when she thought no-one else was in the room. Two weeks before she was taken to the hospital she closed her eyes, and would not open them. She spent her days crying quietly, although she stopped long enough to eat, before starting again. When the doctors first saw her, she hid her eyes behind her left arm, and the rest of her body trembled constantly. They tried to make her smile, which she eventually did, but not without a lot of effort on the part of the admitting doctor. They tried to get a reaction from her by pinching her arms and legs very hard, but she put up with this without making a move or a sound. The harder they tried to part her eyelids, the tighter they were closed. She understood everything that was said to her, and nodded or shook her head whenever questions were put to her.

On admission, Rebecca was put on a diet of beef tea, milk and wine – and laxatives. In order to get her legs moving and her eyelids open, she was given warm showers and galvanic baths, and the nurses lavished a great deal of attention on her. Passing electricity through her body seems to have persuaded her to begin to speak, and certainly, who wouldn’t say almost anything under this sort of treatment? By the 6 May she was running about the garden with other children, but they kept her in under observation until the end of the month. On returning home she once more began to have problems walking, and was readmitted to the hospital on 3 July for ten days, after which she was sent to the hospital’s convalescent home in Highgate. She stayed there for three weeks, being finally discharged, well, on 3 August 1871.

So, what was wrong with Rebecca? Was she really hysterical? The doctors were clearly fascinated by her case, as she was not only allowed to stay in the hospital for 6 weeks and subsequently re-admitted, but she was photographed in her best clothes – with her eyes open and closed – and became something of a Great Ormond Street celebrity. Therein lies a possible answer. Rebecca went silent and still at Christmas, and her immobility ensured her mother’s attention and constant care at this festive time – and beyond. She no longer had to go to school. The hard dry cough may have been part of the same pattern, but how much more dramatic to lie like the Sleeping Beauty for months on end? Perhaps by April she really had forgotten how to walk and talk, and had kept her eyes closed for so long that this had become their ‘natural’ state. The inconvenience of purgatives and the experimental electrical therapy may have been a small price to pay for the benefits of being an in-patient at the Hospital for Sick Children. How gratifying to puzzle eminent medical minds for weeks on end. How wonderful to have the attention of the nurses, to be offered beautiful books, and to have the pick of the ward toys and the use of a big garden as her playground? Life may have seemed a bit dull back at home in Islington, and so the symptoms returned, ensuring another little holiday at the hospital and a few weeks at the lovely old house in Highgate. Was Rebecca suffering from a strange disorder or was it all in the mind a little girl who enjoyed being the centre of attention – what do you think?