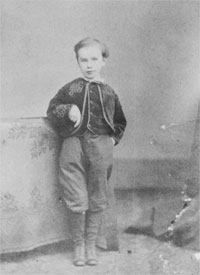 Thomas Garvey was admitted to the Hospital for Sick Children (HSC) on 23 March 1871, age nine.  He was diagnosed as suffering from aphasia, a neurological condition in which ‘the patient while retaining a knowledge of the words, loses the power of uttering the appropriate word, or of framing a complete sentence’. (Catherine Wood, Lady Superintendent of the Hospital from 1878 to 1888) The condition is quite rare, only 12 patients presented with aphasia during the whole 62 year period covered by the HHARP database. Poor Thomas spent most of the rest of 1871 in and out of hospital.

Tom’s case notes survive and describe his condition in detail.  Tom had been a normal healthy boy, able to read and write before his illness. He caught scarlet fever at Christmas of 1870 and was very ill, lying ‘motionless for four or five days’, after which he was unable to speak. His right arm and leg were paralysed, and the right side of his face was ‘drawn’.  For a whole month he suffered from extreme pain in his head, and ‘screamed all the time’. On his admission to the Hospital, three months later, he was able to walk, but his right arm was flexed (as indicated in the photo) and pained him greatly when touched. He made no attempt to speak, and to ‘all questions replied “hmmm”’ or cried, making a noise like in ‘inarticulate animal’. Apart from that the case notes commented that he was generally cheerful and smiling.

The doctors (and to a greater the extent the nurses) seem to have spent a lot of time with Tom, trying to discover the nature of his speech problem. He seemed to understand instructions and could point to other boys in the ward when they were mentioned by name. When asked if he would like some beer, he would smile and nod his head, but asked if he would like cod liver oil he would frown and sometimes cry. When the nurses or doctors tried to encourage him to repeat words after them, or to name familiar objects, ‘after a period of puzzled hesitation during which he is evidently trying to produce the word asked for’ he would say ‘fa’. Later, this word ‘fa’ was replaced by ‘butter’ – which he repeated endlessly, but without meaning.

Tom developed his own way of attracting the attention of the nurses: he went to the centre of the ward and began to unbutton his clothes.  Poor Tom. The nurses and doctors concluded he was quite an intelligent little boy, and was deeply frustrated by his inability to communicate. This frustration often manifested itself in bad behaviour: once he was found beating another boy on the ward, but on being reprimanded he sobbed violently and ‘seemed consumed by grief’ when told the little boy was very ill. He seemed to fight quite a lot.

On 1 June, after two and half months at Great Ormond Street, Tom was moved to Cromwell House, being pronounced improved. However, he stayed only three weeks before being sent back to the main hospital. There was little change in his condition. Although he clearly understood everything that was said to him, the doctors concluded that he was ‘totally unable to receive ideas from writing or to read’.

Tom stayed at Great Ormond Street for a month, before being on the move again, this time to spend some time by the sea at Brighton. His seaside sojourn was cut short however, and in early September he returned to the HSC, suffering from typhoid fever, in addition to his pre-existing condition.  This time, there appeared to be some improvement in his speech: his vocabulary had increased and he appeared to use the words in the appropriate context. However, his speech consisted of single words, with no grammar or structure. After another month in London he was packed off again to Cromwell House, for his last visit. Tom was finally discharged from Highgate on 14 December, pronounced improved, and his care was transferred to the Out Patients’ Department. He was brought back on 18 December by his mother, and could repeat any word said to him and also sang a verse of a hymn. His right arm was still useless but his general health was much improved. The case notes contain samples of Tom’s handwriting, which show that it had clearly progressed  over the course of the year, but even in December he was only able to make copies of what was written, he could not originate any writing himself.

What happened after that is unknown, as no further out patient records have survived.  His treatment had been overseen by Dr William Howship Dickinson and Dr Nunneley, and on his final discharge a second diagnosis was added on the front page of his notes: embolic obstruction in the middle cerebral artery’. In other words Tom had had a stroke. The inscription was followed by two question marks, suggesting his doctors were not entirely confident in this. Modern understanding of the nature of strokes would support such a diagnosis.

Little is known of Thomas’ fate. He cannot be traced in the 1881 census, although his family has been located. In 1871, they were living at the address given for Thomas on his admission (101 Talbot Road, Westbourne Park). His father was absent and his mother, Myra, worked as a dress maker. He had one sister, Ellen, who was five years his junior. (Interestingly, the case notes claim that Tom had two living siblings at the time of his admission– but only one has ever been found in the censuses.) By 1881, Myra had been widowed and had remarried. Her new husband was a butcher by the name of Henry Slack. Ellen was still living with her mother, and also in the family were two young sons presumably from Myra’s second marriage.  (Note: Tom’s case was managed by Dr Dickinson – whose collection of case notes are lodged in the Hospital’s archive, along with those of many other doctors. Currently, only Dr Charles West’s case notes have been digitised and made available through HHARP.)