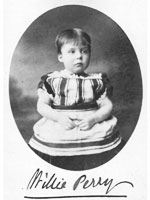 (Charles) William Perry was a patient in the Hospital for Sick Children three times. His first admission was on 19 November 1877. Willie was only two years old and had been suffering from a chronic disease of the larynx for 18 months–nearly all his short life. He stayed in hospital until 2 April 1878, when he was discharged as cured. Part of his treatment involved a tracheotomy, and he was sent home with a ‘soft tube’. Less than a year later Willie was back, entering the Hospital for the second time on 18 February 1879. He was still suffering from a chronic disease of the larynx, and possibly was in discomfort as a result of the old tracheotomy. He was discharged, relieved, on 16 March the same year. The problems caused by the operation did not go away, and Willie made his third and final visit in late November 1881. The damage caused by his ‘old tracheotomy’ three years earlier was obviously still causing him problems. He was discharged, relieved, on 29 December 1881.

Willie Perry was found in the 1881 census, living at the same address as that in the hospital register. His father was a general labourer, his mother had no occupation and he had one elder brother and a younger sister (neither of whom appear in the hospital registers). In this census entry he was referred to as William C Perry. In 1891, age 16, Willie was still living at home with his parents: his occupation was given as florist, but by 1901 William C Perry, now 26 years old, was found living in East Ham. He had married a girl called Virginia and they had a 3 year old daughter named Olive. He was working as a warehouseman, a job requiring a level of fitness and stamina, suggesting his old problems had finally been conquered. Would Willy have made it this far if it had not been for the care and attention of the Hospital for Sick Children?